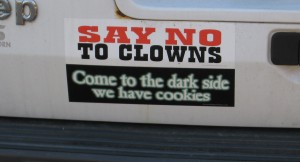 Walking to class yesterday I saw this bumper sticker and it really sums up well my feelings about clowns.  Yes clowns.  They may make sweet things out of balloons, but I find them very strange (or “queer” as my grandma still likes to say and I have to remind her that that vocabulary is now inappropriate).  I also find it strange that parents encourage their kids to be friendly with creepy grown men wearing makeup and concealing their identity.  A lot of kids are told “don’t talk to strangers,” but it instead seems like the message goes something like, “don’t talk to strangers… unless they are wearing makeup and have crazy blue hair.”  Don’t get me wrong, I used to love watching Bozo the clown on WGN before pre-school and honestly, who DIDN’T want to be on the grand prize game (“…a nice crisp clean $100 bill…”).  I also had a clown lamp growing up (that I’m pretty sure is still in my parents’ basement) and a clown bank that held my collection of pennies.  However, once I have a mini-me, I’m pretty sure a love of clowns will not be encouraged.  Have you seen The Dark Knight?  Enough Said.  If you haven’t noticed from the rest of my posts, I’m quite fond of lists. Here is my list of the top 6 creepiest clowns of all time. 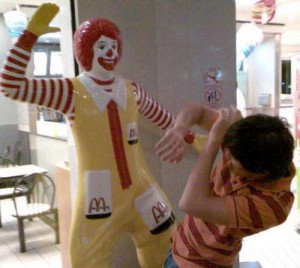 6.  Bozo the Clown – The tamest of clowns on this list, but dangerous nonetheless.  Bozo, gives children free candy (via audience giveaways), free toys (via his games), and money (via the grand prize game).  Evidently some kids were creeped out by Bozo, however. 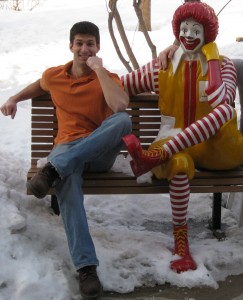 5.  Ronald McDonald– I love McDonald’s breakfast, but would love it even more if if I didn’t have to confront Ronald every time I wanted a bacon egg and cheese biscuit.  He turns happy meals into creepy meals.  Even sketchier is Ronald’s friend the Hamburglar who I was legitimately worried would actually steal my food when I ate at McDonald’s growing up (maybe my brother just told me that would happen).  The Ronald McDonald house is actually a great cause, but I think it would be best if the statues of him were removed from every Ronald McDonald House.

4.  All the clowns in the movie Problem Child – I remember watching Problem Child when I was younger and thinking to myself, “damn, Junior is right.  Clowns are scary!”  As a side note, Michael Richards plays the villain before anyone even knew who Kramer was.

3.  Killer Klowns from Outer Space (circa 1988)– That’s right, Klowns with a K.  Fortunately I didn’t see this when it came out because this would have definitely ruined my second year.  We instead rented it during one of those high school summer nights where you sit around in a basement and look for something awesome to pass the time (this definitely applies).  One perk of the movie is that Dean Wormer from Animal House plays the Police Chief.

2.  Insane Clown Posse – A posse of clowns?  Sounds like a nightmare and listening to their music actually is.

1.  Heath Ledger in Dark Knight – Why so serious?  I’m 22 and this movie disturbed me.  Incredible performance but unfortunately it only intensified my hatred of clowns.

From Tony Perkis to David Bowie…