I recently dropped ridiculously expensive cable and opted for a combination of a free over-the-air antennae, streaming Netflix, and downloading via a Newsgroup.  Having paid internet with no paid TV service is called “cord cutting” and is a major trend among Generation Y.  More specifically, non-subscribers fall into two categories – “evaders” (those who have never purchased subscription-based pay TV) or “defectors” (former subscribers who have cut the cord) – and evidently I’m a “defector” (says the middle aged woman who wrote that article).

In not an economist but I do find the cable industry to be a bizarre playing field.  Although not a monopoly at the federal level, many areas of the country operate as such because consumers are left with only a single viable option for cable service (I’ve written about one such monopoly in the past).  However, unlike other near monopolies, there is a free alternative to cable which provides (almost) similar quality (although much fewer channels).  Imagine if DeBeers, in their monopoly of the diamond market, began giving grade “S” diamonds to the public for free.  Would anyone pay egregious amount of money for grade D diamonds?  How much better would a diamond need to be for anyone to decide to pay anything for it?  Similarly, how much better does MTV need to be for me to pay $70 a month versus settling with HD quality NBC, CBS, ABC, Fox, and PBS for free? 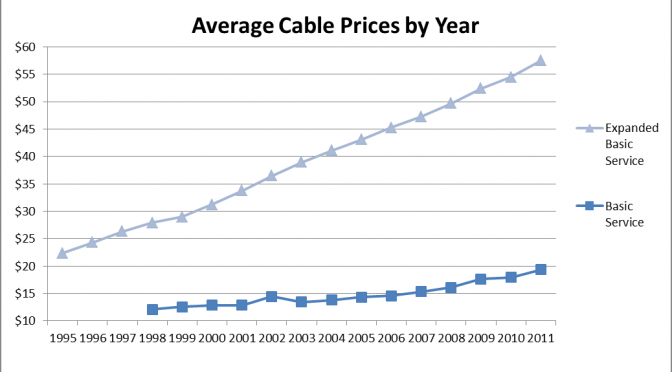 A few definitions according to the FCC:

Comparing these prices to inflation of the US Dollar shows that although “Basic Service” (which I don’t believe anyone actually uses) trends similarly with inflation, “Expanded Basic Service” has gotten ridiculous: 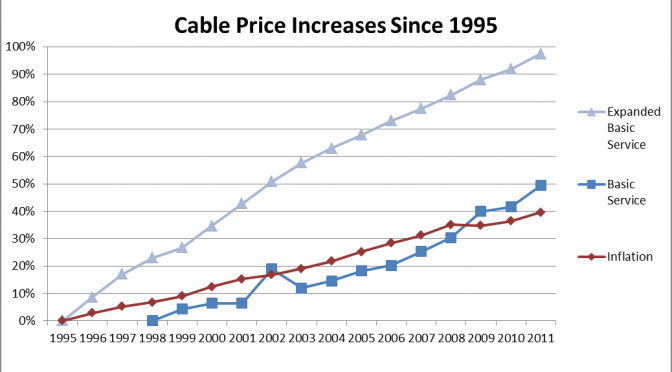 A few issues with these prices: