During our road trip to Colorado this summer the conversation pretty much covered the bases of everything from The Office, to disgusting things that we had only heard about but never tried, and even dating.  One thing that Jake brought up was Ladder Theory (the website is way more elaborate than I expected).  It’s pretty 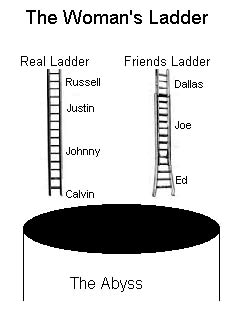 freaking hilarious though and surprisingly accurate…for the most part.  The guy who came up with it must either really hate women or is unemployed with a lot of free time.
The basic concept is that girls have two different social ladders for which they classify guys that they meet.  On one ladder they place guys that they are solely interested in being friends with and on the other ladder they place guys who they’re actually interested in.  Then it claims that unlike women, guys have only one ladder and they place every girl they ever meet on the same ladder.  For example, if a guy meets a girl and finds her uglier than Michael Jackson in a dress, she would be pretty much at the bottom and a girl who is able to turn heads in a gay bar would probably be close to the top.  I found the funniest diagrams to be the one to the right, showing how if a guy tries to jump from the friendship ladder to the real ladder he either successfully reaches the real ladder (which is very rare) or he ruins everything and falls into the relationship abyss, from which there is no turning back.  Hilarious.
Some of my favorite quotes from the website were:

There’s also an article about Ladder Theory on Wikipedia.  I guess you could say it’s kind of a big deal (except the article lacks any real citations).

Ground ball to shortstop, look at the body on that broad, over to 1st base, two down

You know what really grinds my e-mail gears?