I typically associate myself with the conservative side of politics, however, after watching Will Ferrell’s “You’re Welcome America” on HBO for the second time, some absolutely ridiculous portions of his stand-up comedy caused me to wonder, “can that possibly be real.”  There were hilarious quotes that Bush actually said, such as, 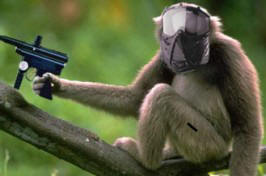 However, some of the things that Will Ferrell went into elaborate detail about were so ridiculous that I wondered if the statements were even closely based on fact.  Maybe I was on a hiatus from the current events pipeline when some of these things actually happened.  For example, among the 46 countries in the “Coalition of the Willing” against Iraq, was Palau (mainly known for their great scuba diving, coconuts, and tapioca), Costa Rica, Iceland, the Marshall Islands, Micronesia, and the Solomon Islands, all of which have no military whatsoever.  This Washington Post article gives a pretty hilarious account of just how elite “the willing” were.  Will Ferrell even went on a rant about Morocco agreeing to send 2,000 land-mine-detonating monkeys, to which I thought “no F-ing way this is real.”  I was wrong. Evidently, back in 2003, United Press International reported that a newspaper in Rabat, Morocco claimed that Morocco offered to send 2,000 monkeys from the Atlas Mountains, “trained” in detonating land mines, to Iraq.  I’m not sure we took them up on this offer, but Will Ferrell sure did have some hilarious things to say about these “crazy, land-mine-detonating/child-entertaining monkeys.”  Ferrell’s act also reminded me of a Daily Show clip that stands out in my memory as one the most hilarious in the show’s history (it gets good around 4:15):

To Cable or not to Cable: The historical cost of cable and the benefits of cutting the cord