If you’re like me, you grew up in the wonderful and comforting land of Caramel DeLites, Peanut Butter Sandwiches, Shortbreads, and Peanut Butter Patties.  However, when I attended the University of Minnesota for my freshman year of college, my Girl Scout Cookie world came crashing down around me.  When trying to purchase Caramel DeLites from some Twin Cities Brownie saleswomen, I was shocked to see that they didn’t sell my favorite cookie.  Upon closer inspection I realized that they did sell what seemed to me to be a generic knock of off, entitled “Samoas.”  It turns out Samoas and Caramel DeLites are the exact same cookie but are merely the different names that the two licensed bakers of Girl Scout Cookies, ABC Bakers and Little Brownie Bakers, have for them.  It seems Little Brownie Bakers has been making Girl Scout Cookies since the early 1980s and ABC Bakers has been making them since 1939.  I suppose that in  forcing the two companies to compete for the nation’s girl scout cookie sales, the Girl Scouts of America has actually managed keep the price of cookies down by forcing economic competition.

However, this system also undoubtedly causes strife for Girl Scout Cookie lovers across the nation.  This is because there is actually very little consistency throughout states or even counties in some instances, whether Little Brownie Bakers or ABC Bakers have been selected as the baker of choice (it is up to the Girl Scout leadership in that region of the country).  So if you find yourself in Buffalo County in Western Wisconsin, be careful how your order your Caramelly Coconut treat.  Much like families were torn apart during the Civil War, it seems Buffalo County has it own Girl Scout struggles between the north and south of the county.  Also, what’s up with Osceola County in northwest Iowa being the only county in the whole state that purchased from Little Brownie Bakers because they are actually a part of Southwest Minnesota’s Girl Scout Leadership?  Either way, that is whack and they must really be in love with Samoas (and not Caramel DeLites).  Thin Mints may be Thin Mints across the board, but here is a summary of the confusing cookie names.

So I did some research – a lot of it actually – and created the following map of how Girl Scout Cookies break down throughout the Midwest.  I highlighted the WI, MN, and UP counties in white but then grew a little lazy as I researched the baker of choice throughout the rest of the map.  If you zoom in you can still make out the other county lines though. 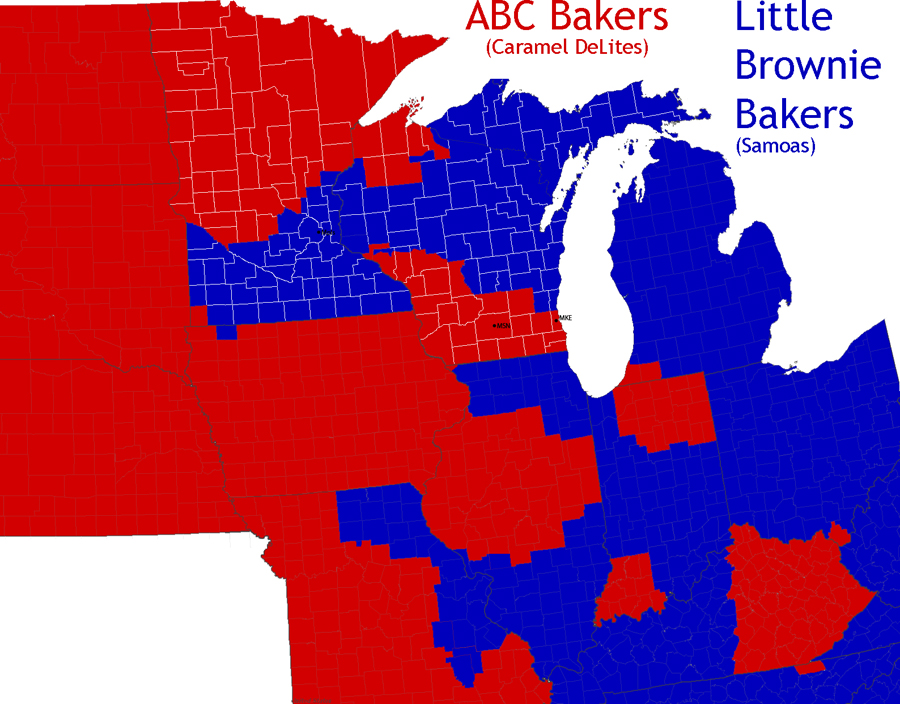 View Minnesota and Wisconsin Map Only

You know what really grinds my e-mail gears?