There’s a running joke in my fiancé’s family that having boys is impossible – they’ve gone 16 tries without one. It’s clear there’s something weird going on with the Metternichs – they’re pretty good at making wine (my brother-in-laws-to-be and I visited the vineyard this past fall in The Rhine River Valley and Dave made gang symbols during wine tasting) and not so good at making boys. So is it impossible for them to have a male? Is the old wives’ tale that you are 30% or even 70% more likely to keep having the same gender child valid (this post attempts to debunk it)? I’m pretty sure the answer is no – if you consider each child’s birth to be an independent event determined by the male (like this geneticist does), the odds of each girl are roughly 50%, suggesting that the Metternich phenomenon is just really really unlikely. I attempt to estimate just how unlikely this is in the below calculations. 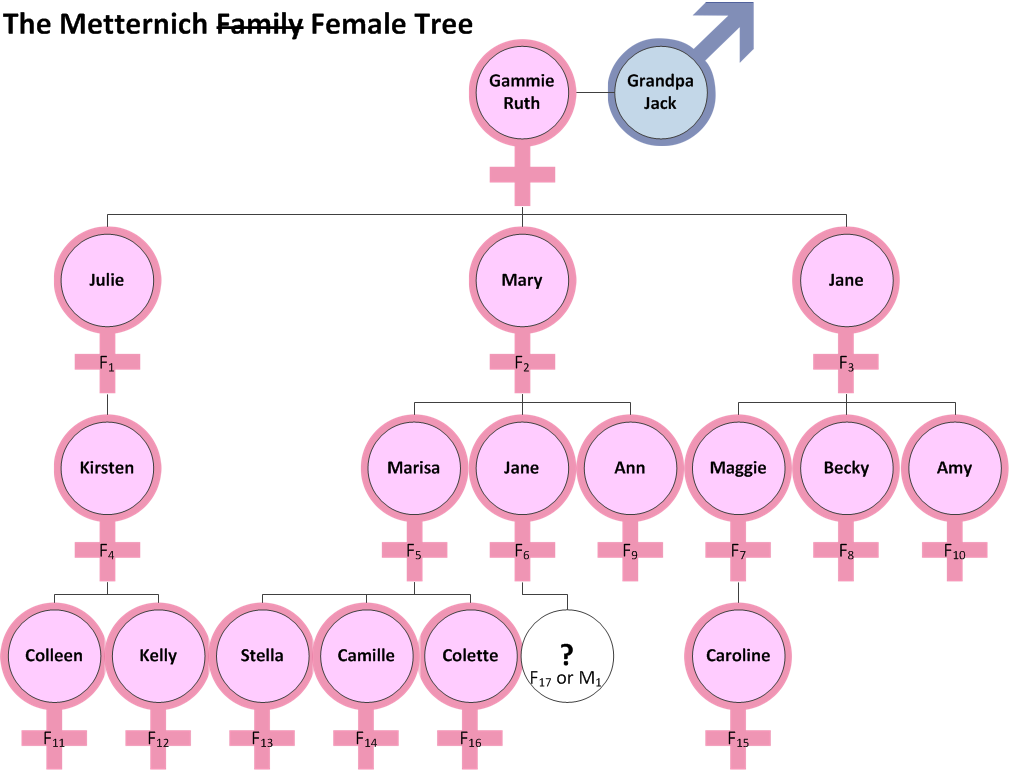 Some of you are probably thinking “but aren’t there more men in the world than women?” The short answer is that since this sample size only consists of 16 babies, a fraction of a percentage won’t really skew the result. If you insist, however, the long answer is that a 2002 study found that the natural sex ratio at birth is estimated to be 1.06 males/female (there are likely evolutionary reasons for this that I won’t discuss here). In other words, they found the probability of having a male to be 53/103 ≈ 0.515. This means they found the probability of a female to be 50/103 ≈ 0.485. Changing the probabilities used in our calculations from 0.5 to 50/103, the odds of the Metternich phenomenon become even less likely.

That means that if future Metternich generations tried to replicate the above scenario 100,000 times, 16 girls in a row is only likely to happen once.

So where do I fit in to this crazy anomaly? I’m marrying F9. She’s pretty great at a lot of things but from the looks of the above diagram, having boys may not be one of them. Fortunately for us, her sister Jane may debunk this for us since she does have Pez in the dispenser (I’m going to trademark that). With Jane and Al’s Baby B to be (F17 or M1) comes another chance to break this ridiculous trend (taking the pressure off Ann and I). What’s your vote for the chances of it being female? Mine is exactly 50%.