Drivers in Colorado are notoriously bad. Not FIB bad but still poor nonetheless. Although this is my opinion, it’s also supported by un-citable anecdotes from our midwestern friends who are CO transplants. You may be thinking to yourself, “self: how is this possible in a state with winter weather and roads that rise to 14,130 feet?” My theories:

With all of this in mind, I’ve noticed an interesting trend in Colorado:  When turning left at a green light, many drivers don’t enter the intersection and instead wait behind the white stop line. The result at congested intersections is that once the light turns red, no one gets to turn. Rather, if cars wait past the stop line they can safely turn once the light turns yellow. Have you ever waited for several cycles of a light behind a (California license plate) driver who won’t edge their car into the center of the intersection? Growing up I would have found this ridiculous but in Colorado, it seems to be frequent (especially when I’m rushing home from work to catch tip off a badger basketball game). This is caused by each state defining their own traffic laws and as a result, many of Colorado’s transplant residents don’t know how to turn left. Interestingly, based on the CO Traffic Code MTC 604, it is legal in Colorado to wait in an intersection (as long as you’re not hindering traffic flow) and then proceed to turn once oncoming traffic has stopped. I set out to understand which states are ruining this interpretation of the law and my results are shown below. 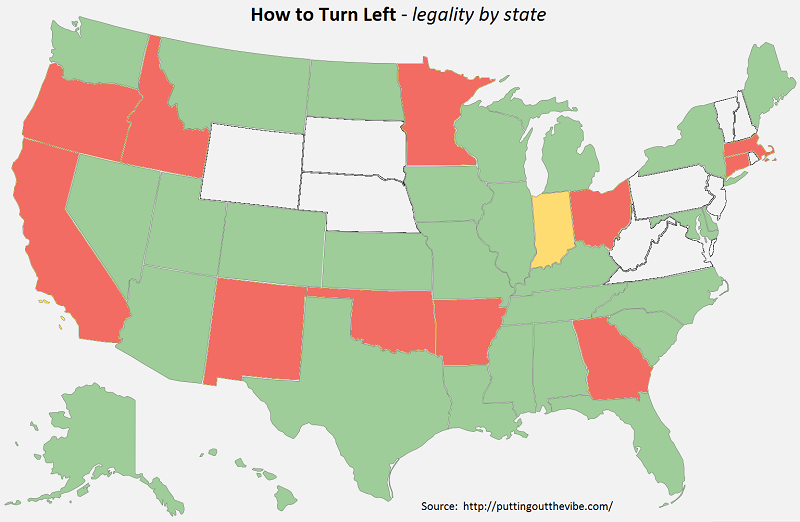 The Disneyland of Mexican Restaurants!

Jokes on you, America!