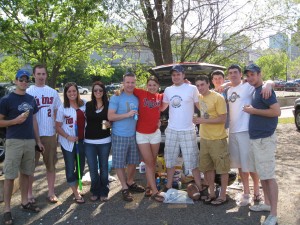 I’ve waited my whole life for a Brewers team to be competitive and worth routing for. When I was younger, although I always enjoyed catching games at County Stadium, maintaining interest in Milwaukee baseball started to become a chore by around July for me.  The past few years, maintaining “brewer fever” has become easier each year of college.  I’ve even been able to easily enjoy brewer games, without frustration, for entire seasons – including catching a postseason game this past fall (an opportunity I thought I wouldn’t have in my lifetime).  The change, which continues to gain momentum, was a gradual one, probably sparked, in my opinion by a shift towards leadership willing to open their wallet to compete in the central division with the Cards, Astros, and the bitch-Cubs (all three with #13, #8, & #3 payrolls in the majors – Brewers are currently #17). 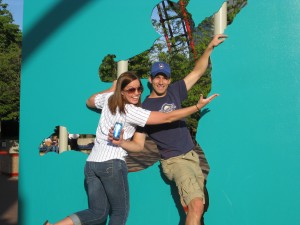 In Bud Selig’s credit, however, he did do a decent job in his charge to graduates at my recent graduation.  Additional dedication to winning was demonstrated in 2008 by a replacement of Ned Yost prior to the end of the Brewers best season since their last playoff birth in 1982.  Things are definitely looking up and I just enjoyed a great weekend in Minneapolis (despite a Twins sweep), for the interleague series and catching up with friends who I rarely see now that they graduated and are real people.

Despite all of the challenging seasons that Brewers fans endured throughout my childhood, however, the one constant of brilliance was always Mr. Baseball, Bob Uecker.  An unbelievable schmoozer of useless, yet extremely interesting information, because of Uecker, I occasionally go out of my way to be in my car during Brewers games, instead of watching them on TV (although I enjoy Bill Schroeder as well).  This weekend in the cities, my friend Mike shared a hilarious video of Artie Lange on Letterman sharing stories about Bob Uecker and also his friendship with Harry Caray:

This clip of Norm MacDonald sharing a Uecker story is pretty good as well.