Erb Park Summers (preschool-2nd grade)
From the time I was in diapers, until shortly after I decided it was no longer acceptable to watch Mr. Rogers, I lived in Appleton.  Appleton was a pretty cool place and Summer there was freakin awesome.  My mom didn’t work at this time, so although I remember her making me read a lot, I also remember her making pigs in a blanket, letting me dig huge holes in our backyard, letting me have lemonade stands and keep the profits, and her taking me to the Erb Park Pool whenever I wanted.  Erb Park was across the street from our house so pretty much all of my friends in the neighborhood hung out there every summer day and played sports and capture the flag.  I was also on the powerhouse that was the “Hahn’s Lanes Hitters” Teeball team and our games, which were played at my elementary school across the street from my Grandparents’ house, were also extremely high on my priority list during these summers.  To sum up, think The Sandlot, only I didn’t know anyone nearly as cool as Benny “The Jet” Rodriguez.

Early New Berlin Summers, my world shrunk to Sommerset Gardens (3-5th grades)
Moving to New Berlin was a bit of a shock because I really couldn’t ride my bike anywhere outside of my neighborhood.  I made a few friends in my neighborhood who I hung out with and I remember a lot of fishing with Jimmy at the tiny pond near the highway.  Baseball and my Dad’s grilled cheese sandwiches were still pretty much the most important things going on during these summers.  I also remember that the first year we formed the New Berlin Magic that we didn’t win a single tournament and our parents felt so bad for us that they bought us each a trophy at the end of the year.

The “Mom, can you drive me to _______’s house” Summers (6th grade-freshman year)
At the end of elementary school I began riding my bike to fast food restaurants (mainly taco bell) for lunch (a pretty big step in New Berlin).  This meant 2 things…  I was also still very devoted to playing baseball on the New Berlin Magic and my friends on the team pretty much composed the majority of my social life.  Our baseball team’s night games at Malone Park were awesome and it made all of us feel like we were actually a big deal to have attractive girls from Middle School come to the games.  These were the last few summers that my brother was around, so that was always fun too.

The Basement Summers (sophomore-senior years)
I still had no legitimate job to speak of (which was spectacular) and I would umpire the occasional little league game/weekend tournament when I felt like it.  Mainly I remember eating at Oakland Gyros a lot with G and going to Kopps Custard and/or Taco Bell almost every night because I was trying to gain weight for football (a strange concept now).  “Pool” Tournaments in my basement were a great excuse to eat way to much food andstay up all night (but Port always cheated).  Whenever Joe used the line “we’re going to have a Star Wars Marathon” with his parents we all knew we were in for a good night.  I hung out with Chris a lot and our bands practiced all the time, including “Skanorrhea, the musically transmitted disease.”  My ideal day during this time (and still probably my ideal day) consisted of going to the beach (or Kallio’s pool), eating all you can eat pizza at Marty’s, and then volleyball at Malone and/or hanging out in a basement for the rest of the night.  Summerfest was a great 2 week span too and in addition to seeing some great performances we got really good at sneaking water bottles through the gates.

The _______’s Parents are out of town Summer (after freshman year of college)
Straight off freshman year we all felt the need to pretend like we were still at college after we came home for the summer.  This meant that much of our day to day activities revolved around whose parents were out of town.  My typical day at this time consisted of swimming in Kallio’s pool in the afternoon, waiting tables at Houlihan’s for the dinner shift, and then playing volleyball at Malone until the lights went off at midnight and we all had to struggle to gather our belongings in the dark. 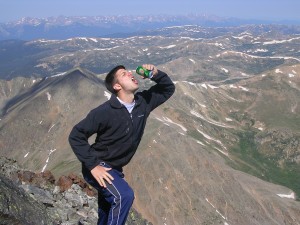 Summer of Sommer in Denver (after sophomore year)
My summer in Denver doing an internship with the Denver Children’s hospital was a great one.  First of all, it was the first time I lived with my brother since I was in seventh grade.  This turned out great and not only did we live together, but Dave served as my landlord, teammate on volleyball and softball teams, trainer, supervisor at work, and karaoke partner.  Looking back I’m a little surprised we didn’t burn out after spending so much time together.  Since I was only in Colorado for a summer though, we tried to fit in as much activity as possible.  This meant Rockies games with Martha and Kyle, parties at my cousin’s house, lot’s of bar league softball teams, fly fishing trips, whitewater rafting, climbing numerous fourteeners (and participating in a high altitude rescue mission), etc.  There was really never a shortage of things to do and the summer was one of my best.

The Pretending to be a real person summers (last summer and the present)
The last two summers I’ve done internships/worked in Madison.  One of these summers felt like it lasted for seven months because I took the semester off to do it.  This was great at first.  I literally did whatever I wanted.  I bought a short bus, built a 1000 lb. pool table in my attic, and designed a pregame parties website.  Eventually though all of my free time without homework became a sort of obligation to go out all the time.  I literally had no good excuse if people called me to go to the Essen Haus on a week night and as a result I was hung over many a day sitting at my desk.  This was the time I began drinking coffee – not as a luxury, but as a necessity.  Summer was fun though and I hung out with Matt a lot, went sailing, went to the Terrace, and pretty much just enjoyed Madison Summer.  This summer I took two classes and worked about 20-30 hours a week.  I thought it would be great, but it was a lot more work than I anticipated.  Nonetheless, weekends were still great, making it to Colorado, going up north to “Jon Fest” with my brother’s friends, camping, and for the first time had weddings of FRIENDS to go to (strange).  Unfortunately any documentation I had of these events disappeared when I got robbed three weeks ago.

So what?
Maybe I’m just tired of the classes I’m trying to take this summer, but what I’d give to go back to the Erb Park Summers.  Don’t get me wrong, Summer is still my favorite time of year, but it means something so different to me now than it did when I was a kindergartner, whose only real worry was whether or not Megan from around the corner was able to play that day.  I’ve never liked school (even preschool) so summer has always meant for me a break from the stress of another school year/semester.  I’m sure even when I’m a real person I’ll still love summer time because the world just seems to slow down and enjoy itself, but I can’t help but feel that the summer feeling that I’ve enjoyed over the years is slipping further and further away.  Maybe all I need to do is go to the beach, ride my bike to Taco Bell, and have a lemonade stand in my front yard, just like the old days.

My childhood in a nutshell

Television Revolution: The programs that ran my life